I stayed in Malta for almost 3 months. Every time I tell them where I am, they all ask, “Where?” I also asked the same question the first time I heard of it. Sorry, but I never heard of Malta before. Honestly, I never thought I’ll be coming here. But I am truly grateful that I was given an opportunity to travel and work here for a while. 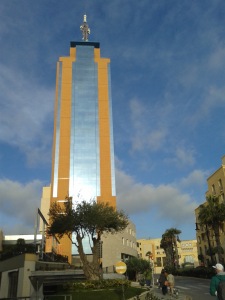 I first stayed in a flat at St. Julian’s bay. It was far from the office compared to where my colleagues are staying so I really am envious. Moreover, there’s only 6 of us staying there. It’s like they secluded us from the rest. However, the place where were staying is actually more beautiful than the rest. Beautiful in a sense that it’s near a bay and not that residential. Night life is also a short walk away. Haha. But considering the expenses, it’s a bit unfair because we allot money for transportation while most of them are just walking to and from the office.

On my second day, my flatmate and I ate at Ir-Rokna, the oldest pizzeria in Malta. They – my flatmate and other co-workers – highly recommended place. And I agree, the food tastes good. No wonder the place is still making money up to now.

I wasn’t able to go to a lot of places there. Personally, I have no idea what the tourist spots are in Malta. So I just go out with them whenever they plan on travelling somewhere. But according to a teammate of mine, there are films shot here. There are scenes in Game of Thrones, for instance, that were shot here. Brad Pitt’s World War Z was also filmed in Malta.

Azure window is the only tourist spot I know. I just stumbled upon it on Google+ while browsing. It’s beautiful up close but really scary. You can hear the waves crashing to the rocks. Standing at the edge of the cliff was also a knee-shaking experience. Nevertheless, it’s a place one shouldn’t miss when visiting Malta.

The first time I went to Valletta was on a Sunday. I was surprised because almost all shops are closed on Sundays. Apparently, that’s the way it is there as opposed to what I was used to. But there were a lot of significant landmarks around the streets – statues, museums, palaces, etc.

We also went to Marsaxlokk. Unluckily, it was raining the moment we set foot there so it was really muddy. Good thing it didn’t last long. There were a lot of goods sold for a cheap price. It is comparable to Philippines’ Divisoria, only a bit cleaner and has a scenic view.

Because of my laziness, I was only able to go to these places. I missed Popeye’s village, Mdina and others. Despite that, I would say that Malta is a good place to stay especially during summer because of the beautiful beaches.

"Do something, even if it's not the magical, wonderful thing you had in mind. Don't sit around for one more second pining away for some fantasy that might never come along, because it might not even exist."
--Lauren Morrill