Me and my college friends have planned this all since last year, before I left to Malta. We found a relatively cheap tour so we took advantage of it. Hence, we were able to go explore a bit of Sagada. 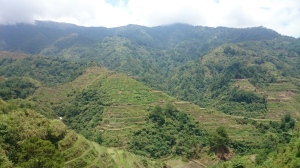 On the way north, we first passed by one of Philippines’ most popular heritage site – the Banaue Rice Terraces. Even now, I can say that the ancient tribes did a remarkable job in doing such majestic work. A masterpiece residing in the mountains. I am quite afraid of heights so I wasn’t able to roam around. Nevertheless, from where I was standing, I saw almost the entire rice terraces and was definitely awe-stricken. It looks different, in a positive way, than the ones I saw on pictures and textbooks when I was younger. 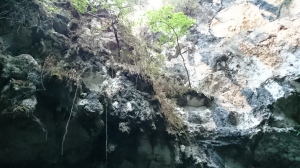 Sagada is popular for spelunking. There’s a couple of caves one could go into. Unfortunately, I wasn’t also able to go inside because of, well, girl problems. But some of my friends did. They had fun, and, as seen from the pictures they took, it was a struggle inside the cave. They did a bit of rappelling and a lot of walking. Good thing I backed out. Haha. But the cave is really beautiful inside. I just wish I could go spelunking if ever I’ll go back.

So, while they’re having a hard time in the cave, me and the others who didn’t went inside grabbed lunch in Sagada Brew. The thing is, the crew forgot to write down my order, so all I had to eat was their chocolate lava cake. Jumped to the dessert, but I didn’t have any regrets. Their chocolate lava cake is very delicious, probably he best delicacy I’ve eaten during our whole stay. Actually, I’ve been craving for a lava cake up until now. If only there’s a Sagada brew down here in Metro Manila.

As soon as they got out of the cave and finished eating lunch, we immediately went to see the Bomod-ok falls. We trekked for an hour just to go there. It was very very tiring but all worth it. The water’s really cold. We just stayed for a few minutes, took photos then walked back. The way back is the hardest struggle since we’ll be trekking up the mountain. Personally, I felt my legs aching and my knees shaking. We were all catching our breaths on our way. However, we saw fireflies along the way, making the struggle a bit lighter.

On our way home, we passed by Baguio. Walked and shopped around the strawberry farm then went on art appreciation at the Ben Cab museum. The road back was also a challenge because it was raining. Thank God, we got home safe and sound.

"Do something, even if it's not the magical, wonderful thing you had in mind. Don't sit around for one more second pining away for some fantasy that might never come along, because it might not even exist."
--Lauren Morrill